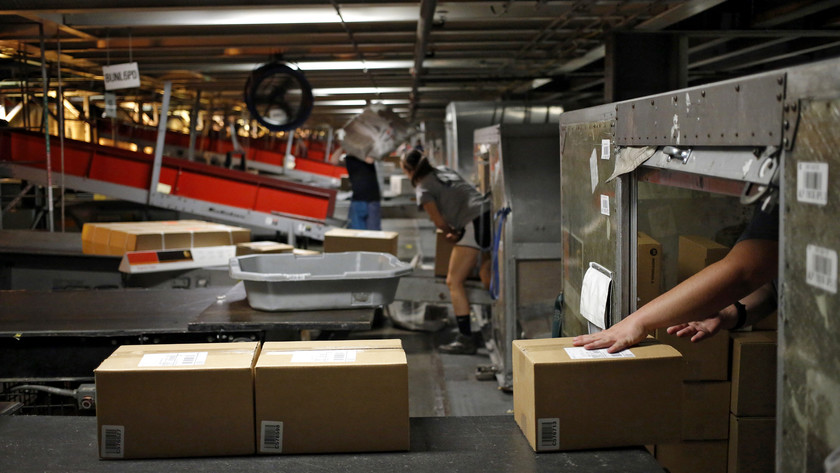 Outside a brick-and-mortar sorting facility in suburban Atlanta, UPS has built its own Christmas village.

It’s functional, if not festive: the company welded together aluminum segments and placed them atop a poured concrete floor to create a makeshift package-sorting facility in an employee parking lot. Inside, conveyor belts whisk packages toward the gaping delivery bays and awaiting delivery trucks.

These “mobile distribution center villages” deployed around the U.S. are designed to help avert a repeat of last year’s Christmas delays that saw thousands of gifts delivered a day or more late. United Parcel Service Inc. (UPS) is in crunch time. It expects six days this month to surpass its single-busiest shipping day of last year. Things should peak today with an estimated 34 million items dropped off at homes and businesses.

“It all goes back to 585 million packages in the month of December,” spokesman Dan Cardillo said. “It’s a lot more packages than we usually handle.”

The center in Roswell, Georgia, resembles a metal outdoor self-storage unit and even though it’s equipped with space heaters, a morning visit last week felt as chilly inside as the 28 degrees Fahrenheit (minus 2.2 degrees Celsius) outside.

The temporary structure means a 40 percent boost in capacity to process holiday gifts in surrounding ZIP codes for the world’s biggest delivery company.

UPS has spent the past 12 months preparing for this. Memories of last year, when it missed some Christmas deadlines because of bad weather and a rush of last-minute online orders, are fresh. The company took an image beating and was forced to make $50 million in refunds because of missed deadlines. In response, UPS moved up its plans for $500 million in capital projects to accommodate this year’s peak season, and it dedicated another $175 million of operating expenses to it.

The moves are paying off as UPS navigates today’s crush of packages, said Andy McGowan, a spokesman for the company.

“While today will be UPS’s busiest day of the year, we expect packages to be delivered as planned,” he said. “All UPS air and ground operations are operating smoothly, demonstrating the value of the additional investments in capacity and technology.”

During the week of Dec. 7 to Dec. 13, UPS deliveries were on-time 95 percent of the time, according to package tracking company ShipMatrix Inc. That’s an improvement over the same week a year earlier, when UPS’s on-time rate was 92 percent.

“This year, because they’ve done planning, they are sustaining the service levels,” said Satish Jindel, a logistics consultant from Sewickley, Pennsylvania, and president of ShipMatrix.

UPS shares rose 0.9 percent to $112 at the close in New York. They gained 6.6 percent this year compared with a 12 percent increase in the Standard & Poor’s 500 Index.

The mobile villages are a piece of UPS’s strategy to make things right this year, along with hiring 95,000 seasonal workers to sort boxes and deliver packages. That exceeds the peak-season hiring done by Amazon.com Inc. (AMZN) and Macy’s Inc. UPS operated one mobile village last year, and rolled out another 14 across the country this year.

In Roswell, 22 miles north of Atlanta, the 100 employees at the mobile village supplement the work done at a 225,000-square-foot (20,900-square-meter) permanent sorting facility next door. As many as 90 trucks a day pull into the delivery bays, awaiting fresh loads of tricycles, Christmas sweaters and electronics bound for Roswell and nearby Marietta. That adds to the 200 vehicles the regular processing center accommodates.

On a recent morning, village workers dressed in jackets, gloves and hoodies picked items off conveyor belts. A label affixed to each box tells employees which truck to load the box in and what shelf to put it on. Next-day items due at offices and homes by 10:30 a.m., go up front, less pressing deliveries go in back.

Work at UPS starts early, with some employees arriving at about 3:30 a.m., expected to load three trucks in a five-hour shift.

Cardillo, the spokesman, declined to give UPS’s startup cost for each mobile village.

“These temporary delivery centers provide us enormous flexibility,” Cardillo said by e-mail. “This not only includes during peak season, but any time of year. These MDCs can be moved anywhere around the country to set up temporary operations.”

In January, UPS will take down its aluminum panels and conveyor belts, leave the concrete foundation intact and it will return to a parking lot. Until then, employees are parking at a concert amphitheater nearby and shuttling to their jobs in school buses.

“We will be getting right back to work servicing customers we serve every day,” Cardillo said. “The peak holiday deliveries will be done, but the returns pick up right away.”

To contact the reporter on this story: Michael Sasso in Atlanta at msasso9@bloomberg.net