by Jed Lewison for Daily Kos 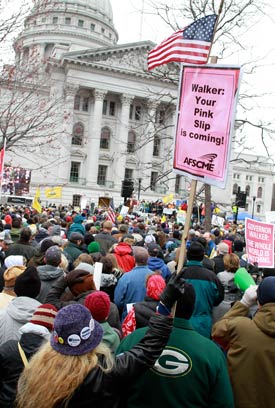 Union supporters at Saturday’s Sarah
Palin rally (Allen Fredrickson/Reuters)
John Nichols notes that Sarah Palin’s anti-union tea party rally was overwhelmed by union supporters on Saturday:
Madison’s ABC News affiliate reported that “pro-union labor supporters surrounded smaller groups of tea party members waiting for former Alaska Gov. Sarah Palin to appear outside the Wisconsin Capitol” while the NBC affiliate reported: “A solid core of tea partiers were near the stage, but they were flanked on all sides by union protesters who have dominated protests at the Capitol for months. The tea party folks had the microphone, but the crowd had the volume, literally and figuratively.” … When Palin got to the frontlines, she was greeted not with a warm embrace but with a throngs of Wisconsinites holding signs that read: “Grizzlies Are Not a Native Species,” “The Mad Hatter Called… He Wants His Tea Party Back,” “I Can See Stupid From My Condo” and “Wisconsin Loves Tina Fey!”—a reference to the comic who famously parodied Palin on NBC’s Saturday Night Live.
To be clear, there were Palinites present. What was surprising—in a state where the political climate is charged, and where there are genuine divisions—was that there were not more of them.
The New York Times reported that even even Scott Walker skipped the rally, adding that it was “uncertain” how many of the 6,500 in the crowd were actually supportive of Palin’s message. Whatever the exact numbers, the fact that the pro-union presence rivaled or even outnumbered those who showed up to support Palin’s teahadist message is yet another reminder that all the energy in this debate is on the progressive side.