Are members of Congress paid enough? 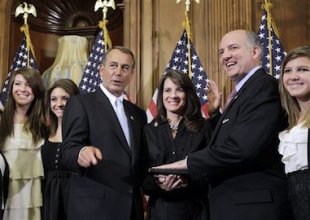 Everyone complains about their job now and then, and members of Congress are no exception.
A few lawmakers have suggested in recent months that despite a $174,000 annual salary, generous health care and pensions, and perks for things like travel and mail, being one of the elite 435 ain’t always what it’s cracked up to be. And when you calculate the hours they put in, the pay isn’t stellar either, they say.
The Florida Capital News reported last week on a speech Steve Southerland, a Republican representative, gave to a retirement community in Tallahassee in which he complained about some of the parts of his new job:
“He said his $174,000 salary is not so much, considering the hours a member of the House puts in, and that he had to sever ties with his family business in Panama City. Southerland also said there are no instant pensions or free health insurance, as some of his constituents often ask him about in Congress.
“‘And by the way, did I mention? They’re shooting at us. There is law-enforcement security in this room right now, and why is that?” Southerland told about 125 people in an auditorium at the Westminster Oaks retirement community. “If you think this job pays too much, with those kinds of risks and cutting me off from my family business, I’ll just tell you: This job don’t mean that much to me. I had a good life in Panama City.’
“…He added that ‘if you took the hours that I work and divided it into my pay,’ the $174,000 salary would not seem so high.”
Southerland, a freshman, ran a family funeral home business in Panama City and earned about $90,000 before joining Congress in January.
His sentiments were not unlike those expressed by Sean Duffy, a Republican representative from Wisconsin, when he said in March it was a “struggle” to pay his mortgage and student loans with his congressional salary. “At this point, I’m not living high on the hog,” Duffy, a father of six, said. (Compared to his colleagues, Duffy is one of the least wealthy members of Congress.)
At the height of the debate over a possible government shutdown last spring, Linda Sánchez, a Democratic representative from California, said during an MSNBC interview that she was living “paycheck to paycheck” on her congressional salary. And she wasn’t the only one. Renee Ellmers, a Republican representative from North Carolina, was asked if she would forgo her pay in the case of a shutdown. Ellmers declined, saying, “I need my paycheck.”
Are times really so tough that even members of Congress are struggling to get by? The numbers suggest otherwise. A recent analysis of congressional pay found that members of Congress earn about 3.4 times the salary of the average American worker. Using that standard, members of Congress are among the highest paid legislators in the developed world.
This talk probably won’t help Congress’ approval rating. The federal government is the worst-rated industry in the country, viewed favorably by only 17 percent of Americans, according to a new Gallup survey.