UPS has the hottest chick in the game driving its trucks. Beyoncé is not taking up a new job, but she did make a special delivery for her fans on Instagram. B posed for an impromptu photo shoot behind the wheel of a UPS truck in New York City, sporting a striped jumpsuit and curly hair. She is gearing up for her “Mrs. Carter Show World Tour,” which kicks off in Belgrade, Serbia, on April 15.

I like a company that keeps track of your orders. When I had bookmarks made for my new Barringer’s Pass series, Earthly Charms told me when it shipped – Monday – and when it would be delivered – today. UPS seemed to be running late, as it hadn’t arrived by late afternoon. Then I got an email from the company – did I receive my bookmarks? UPS said they couldn’t get all the way up my driveway and left it by a tree half way to the house. They wondered if perhaps deep snow made the driveway impassable.

I hopped in the truck to check it out – sure enough, there were two parcels wrapped in plastic and propped up by a tree. The other package was the edits from NY on my next book. If it really had been snowing, I might never have found them.

In fifteen years of living here, this is the first time a delivery didn’t make it to the house. This is the treacherous driveway he couldn’t handle. The package is at the base of the tree on the right. 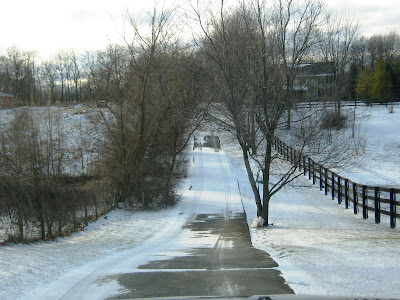 A previous UPS driver had told me that company policy says they’re supposed to park on the road and walk up to the house. Obviously, if he did that in my neighborhood where most houses are far off the road, he’d never get done. But that was the rule – walk it up to the house.

I went to UPS.com and used every character permitted to me to explain my dissatisfaction with their service. They’re supposed to answer within twenty-four hours.

Teamster households now have access to a leading brand of tax preparation software, TurboTax, at a discount of up to $20 off the price for federal products. A portion of the purchase price will be donated to the James R. Hoffa Scholarship Fund in honor of the 100th birthday of James R. Hoffa.

UPS, UPS Freight Teamsters Rally Across the Nation for a Fair Contract

Thousands of UPS and UPS Freight Teamsters rallied for strong contracts at events across the nation on February 16 and 17. At rallies in Seattle, Oakland, Los Angeles, St. Louis, Indianapolis and Toledo, General Secretary-Treasurer Ken Hall and members of the National Negotiating Committee mobilized members for contract negotiations. More rallies were held across the East Coast this weekend in a continued show of Teamster force for negotiations in the largest collective bargaining agreement in North America. General President Jim Hoffa, Hall and members of the National Negotiating Committee also led rallies in Boston on Friday, February 22; Newark, Philadelphia and Baltimore on Saturday, February 23; and Atlanta, Orlando and Tampa on Sunday, February 24.