United Parcel Service is one of the most recognized brands in the world of corporations. But the company’s image has been meticulously created. Once you pierce the brown wall of propaganda, what’s behind isn’t pretty–as union workers, mainly members of the International Brotherhood of Teamsters, at the company’s 1,900 U.S. facilities know well.
In this first article in an occasional series on the history of United Parcel Service and workers’ resistance to Big Brown, Joe Allen examines the company’s founder James E. Casey–the so-called “Package King”–whose personality and polices still shape UPS to this very day. 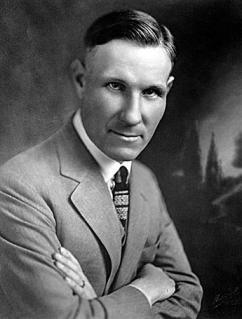 Applicants for United Parcel Service jobs must, first of all, impress a personnel man with their neatness and courtesy. If they pass muster on those counts, they are subjected to intelligence tests. No one at United Parcel, least of all Casey, is searching for a genius-type deliveryman. The personnel department has discovered that high-scoring applicants are inclined to be temperamental and to mislay their bundles. Assuming that the results of an applicant’s test place him somewhere in the broad category between wizard and idiot, and that job is available, he is hired.

Hamburger’s snide comments aside, he does capture Casey’s search for the moldable personality he could shape into the proper driver. This molding process continued after work hours. “A man who gets a job at United Parcel finds that his education has just begun,” Hamburger writes. “The leisure hours of an employee are supposed to be crowded with self-improvement projects.”
Such projects included reading the UPS newsletter The Big Idea, which was filled with homilies to the UPS way of doing business, employee profiles and witticisms from Casey himself.
The UPS search for the perfect worker led to periodic rebellions against the military disciple and cult-like atmosphere at the heart of Casey’s policies. The company’s founder never tired of trying to “improve” his drivers. One of Casey’s more obsequious biographers, Gregg Niemann, in his 2007 book Big Brown: The Untold Story of UPS, enthusiastically defends such policies with the statement, “UPSers turn out better than machines.”
Casey’s obsession with packages also never flagged. In one memorable scene in Hamburger’s article, he captured both Casey’s fascination and bigotries together:

Recently, he stood silent with a friend, watching thousands and thousands of packages. He was silent for several minutes. Then his face lighted up. He seemed exhilarated. “Packages for everybody!’ he exclaimed suddenly. “Packages for Chinatown–a difficult area. Drivers have trouble remembering who they left the package with–everybody looks alike! Packages for Harlem–hardly any charge accounts in Harlem! Packages for the West Side–democratic neighborhood. Give packages the kind of welcome packages deserve! Packages for Greenwich Village–very odd packages!

In the next installment of this series: How did the Teamsters penetrate this strange little fiefdom?